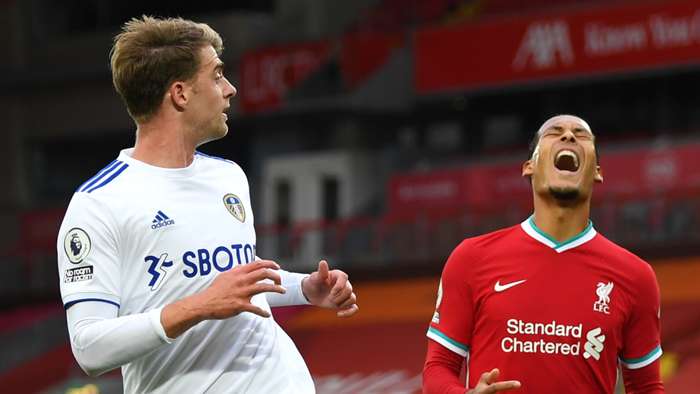 Liverpool found a way to beat Leeds at the end of their pulsating Premier League curtain-raiser on Saturday, but the reaction from the champions was unanimous – the newcomers are going to cause teams problems.

Both Jurgen Klopp and Virgil van Dijk were full of praise for Marcelo Bielsa’s side as the teams opened the new season with a classic encounter at Anfield.

Listen to the boss on #LIVLEE, Mo’s hat-trick and more on @LFCTV GO

Leeds equalised three times and threatened throughout the game, but were eventually seen off as Mohamed Salah completed his hat-trick with his second penalty of the game in the dying minutes.

Van Dijk scored Liverpool’s second goal of the game with a powerful header from a corner but was then at fault for Patrick Bamford’s equaliser.

“I enjoyed the win for sure,” the Dutchman told BBC Match of the Day.

“It’s totally what we expected from Leeds. At times we could have done better but the most important thing is the three points.

“Leeds are going to cause a lot of teams problems because of the way they play. Credit to them.”

Klopp was seen mouthing the word ‘Wow!’ to opposite number Bielsa after full-time, and he agreed with Van Dijk that the new boys have a big season ahead.

“A lot of people said Leeds can cause us problems and they did,” Klopp told BBC MOTD.

“We were ready for a fight, I like that. I love the desire we showed. We didn’t stop and I like that.

“We will analyse the game. We made mistakes. We have to continue to work. We have to make sure we are prepared next game.”

Reflecting on the game, Klopp said he could excuse some of the rustiness from his players as he argued playing football ‘isn’t like riding a bike’.

The post Leeds are going to cause problems – Klopp, Van Dijk appeared first on Sporting Life.