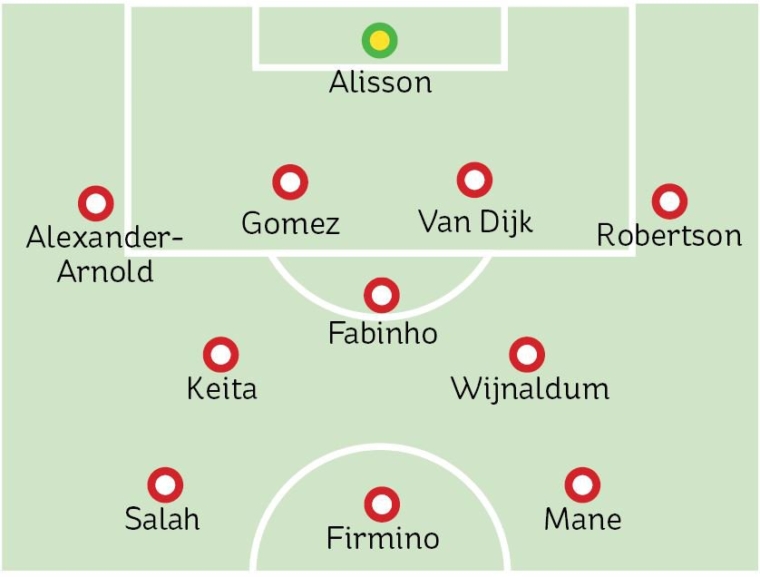 Liverpool kicks off their Premier League title defence with a 4-3-3 formation against Leeds United on Saturday.

The Reds cruised to their first league championship in three decades last season but barely strengthened the squad in the transfer window, having spent just £11.7m this summer.

Manager Jurgen Klopp has defended his club’s lack of signings, insisting that Liverpool cannot simply spend cash like rival clubs that are “owned by countries, owned by oligarchs”.

Kostas Tsimikas is the sole arrival on Merseyside yet the £11.7m signing will miss this weekend’s season opener due to reportedly testing positive for Covid-19.

Thankfully for Klopp, the Greek’s absence is unlikely to have affected his plans too much heading into this game.

The manager will have to decide whether or not to start James Milner against his former side, with the Yorkshireman no doubt keen to remind Leeds fans of what they have missed over the past 16 years.

And Klopp has further injury worries to contend with amongst his reserves, although the first XI on Saturday should effectively pick itself.

Here’s how Liverpool could line up against Leeds as they get their title defence underway.

Defence
Brazilian goalkeeper Alisson proved to be a consistent presence between the sticks for Liverpool last term and will keep his place this weekend.

Andrew Robertson is all set to play at left-back, what with Tsimikas being absent for this game.

The central-defensive partnership of Joe Gomez and Virgil van Dijk, which was deployed in all but one of Liverpool’s games during the summer as they cruised to the title, will remain.

And Trent Alexander-Arnold, who missed the Community Shield final defeat to Arsenal last month, will return at right-back.

Neco Williams will therefore drop to the bench but the 19-year-old could get game time at some point on Saturday.

Klopp’s biggest headache for the visit of Leeds is his reserve midfield ranks. Jordan Henderson is a fitness doubt due to a knee injury, while Alex Oxlade-Chamberlain and Xherdan Shaqiri are out.

It means Takumi Minamino and James Milner could be called upon if Klopp’s main three midfielders suffer a knock during the match.

The manager will likely stick Fabinho in the heart of his midfield, with Naby Keita and Georginio Wijnaldum either side. It’s a midfield that offers as much going forward as it does defensively, and could prove Leeds’ undoing on Saturday.

Milner may therefore have to make do with a place on the bench against his boyhood club, while Klopp has Minamino on hand to offer a more attacking option if required.

Nineteen-year-old Curtis Jones could also earn some minutes if things are running smoothly at Anfield.

Roberto Firmino is expected to lead the line as he did all last season and is likely to prove a tough introduction to Premier League football for new Leeds signing Robin Koch.

Mohamed Salah – fresh after scoring 19 Premier League goals last time out – is no doubt eyeing his personal record of 32 bagged in the 2018-19 campaign.

And Sadio Mane completes the attack after starting and scoring in the 7-2 friendly win over Blackpool last weekend.

Klopp could decide to drop Wijnaldum for Minamino and push the Japan international forward into a more attacking position, while leaving Fabinho and Keita deep.

But however he chooses to shape his midfield and attack, the boss will be aware that Leeds are heading to Anfield high on confidence after Marcelo Bielsa signed a new contract at the club this week.