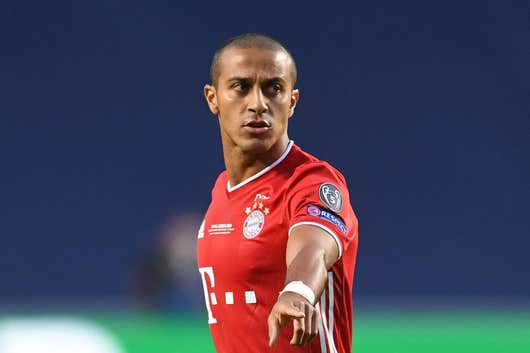 Former Bayern Munich president Uli Hoeness believes Thiago Alcantara has an agreement with Liverpool, Manchester United or both, and claims the Premier League are trying to hold the German champions to ransom.

The Spanish midfielder has been a mainstay in a highly successful Bayern team in recent years, playing a pivotal role as they won every game in their Champions League campaign, where they eventually lifted the cup by defeating Paris Saint-Germain 1-0.

Thiago – who is available for a cut-price with under a year remaining on his contract – has been heavily linked with a move to the Premier League, particularly Liverpool.

Standard Sport understands that, while Liverpool are interested in Thiago, they are not expected to make a move this summer unless a key midfielder, such as Gini Wijnaldum, leaves.

Bayern CEO Karl-Heinz Rummenigge has admitted Thiago is likely to leave this summer, but Hoeness has now hit out at both Liverpool and United, insisting they are trying to force the club into a cheaper deal.

“It is a difficult situation,” he told Sport1. “A while ago we agreed on a new four-year contract. Some days later he said: ‘I’m looking for a new challenge.’ Which is totally okay.

“I think he obviously has an agreement with Liverpool or Manchester United or both of them. Now both clubs are bluffing, and no one has contacted Bayern Munich officially.

“From my point of view, that has no style. They’re trying to blackmail us, by waiting until the last week, when they’re going to make a cheap offer.

“In that case FC Bayern have to ask themselves the question: do they want to go along with that or do they tell the player that he has to stay.

“It’s going to be a hot three weeks until [the transfer window closes on] October 5.”