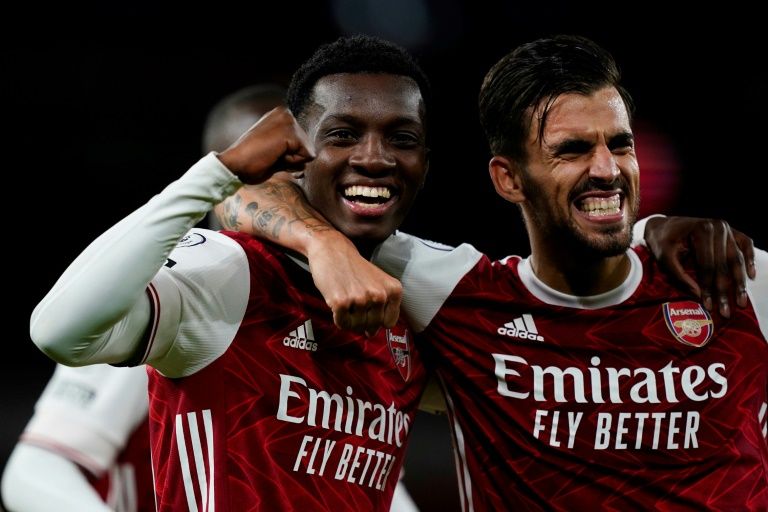 Eddie Nketiah came off the bench to score the winner as Arsenal overcame an underwhelming performance to beat West Ham 2-1 on Saturday night.

The Gunners move level with Everton and Crystal Palace on maximum points at the top of the table after two games, but were far from the standards they have set under Mikel Arteta as the visitors enjoyed the majority of the chances after Michail Antonio cancelled out Alexandre Lacazette’s opener for the hosts.

Antonio saw a second-half header come back off the bar, but Arsenal were ruthless with their chance to win the game as Dani Ceballos timed his run perfectly in behind the West Ham defence to square for Nketiah, who had the simple task of rolling into an empty net.

After winning the FA Cup and Community Shield and starting their season with a flourish by winning 3-0 at Fulham on the opening weekend, Arsenal were expected to swot aside a West Ham team that were easily beaten by Newcastle a week ago.

But David Moyes’s men deserved something to show for their performance and felt hard done by with some decisions that went against them.

After a relatively trouble free first weekend of the season for VAR reviews, the inconsistent application of what constitutes handball reared its head on Saturday.

After Manchester United’s Victor Lindelof was penalised for handling inside the box during his side’s 3-1 home defeat to Crystal Palace, West Ham were not awarded a penalty for what seemed a much more obvious handball from Gabriel Magalhaes early on.

Pierre-Emerick Aubameyang committed his future to Arsenal earlier this week by signing a new three-year contract and the Gunners’ prolific goalscorer was the creator for the opening goal as he just managed to stay onside from Bukayo Saka’s pass before crossing for Lacazette to power a header home.

That was the only clear opening the hosts created before half-time and West Ham levelled just before the break when Antonio outmuscled Rob Holding to turn home Ryan Fredericks’s inviting cross.

Antonio was a constant menace to the Arsenal defence and came close twice more in the second period.

Gabriel just did enough to take the sting out of his first effort for Bernd Leno to save on the line before Antonio powered a header back off the crossbar.

And West Ham were made to rue those missed chances as Arsenal were clinical with their only clear sight of goal in the second-half.

Ceballos and Nketiah were involved in a spat during the warm-up at Craven Cottage last weekend, but showed they were back on the same wavelength as the Spanish midfielder unselfishly squared for the England under-21 international.