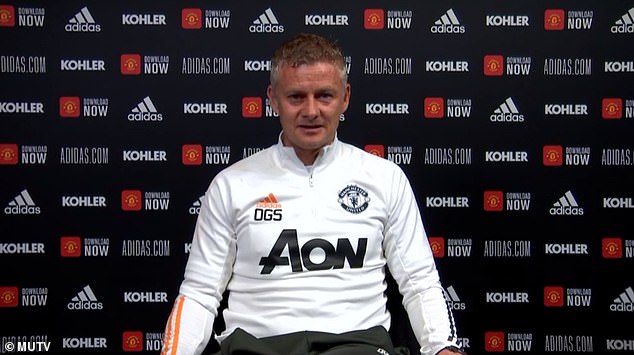 The Manchester United manager is under pressure to bolster his squad after losing the first Premier League game of the season at home to Crystal Palace.

So far United have added only Dutch midfielder Donny van de Beek but questions have been asked recently about the central defensive partnership of Harry Maguire and Victor Lindelof.

The United boss was in no mood to pass the blame, after a disappointing 3-1 defeat to Crystal Palace.

Solskjaer said ahead of Saturday’s visit to Brighton: ‘Last season proved to us how we can defend at our best.

‘Yes, last week was not fantastic. We conceded sloppy goals.

‘But our defensive record last season showed with Eric and Harry how good a partnership they can be [we can do it]. We defended very well as a team.

‘Eric [Bailly] is fit again which is a big bonus. I am looking forward to him developing. We have been waiting for him to be fit and to play more regularly.

‘I am very confident in my players. We are working on getting better.’

United have a big squad by Premier League standards with a number of players seemingly having little chance of starting games this season.

Asked if this could be a problem, Solskjaer said: ‘It is not my job to keep them happy.

‘My job is to pick players to get results. It is up to them to be fit and work hard and be ready when called upon.’

But Solskjaer wouldn’t be drawn on whether United plan to make any more new signings to bolster his squad ahead of the transfer deadline on October 5 as fans grow more anxious about the lack of new additions.

‘As I’ve said many times I’m very confident in my players,’ he said. ‘If and when something happens, both ins and outs, we’ll update you. In football you can’t predict too much.

‘For me, I’m just working on getting better. My focus is solely on the game, I can’t be thinking any other way. We need points and then we can talk again.’

Solskjaer has tried to establish a consistent central defensive partnership between captain Maguire and Lindelof.

However, Lindelof conceded a penalty in the 3-1 defeat to Crystal Palace last weekend and Solskjaer’s positive comments about Bailly could suggest the Ivorian will replace Lindelof in the side.

It comes as Chris Smalling makes a plea to leave United before the deadline following a successful loan spell with Roma last season.

Other options include Phil Jones, who was used sparingly last season, Marcos Rojo, who went out on loan to Estudiantes in Argentina, and the inexperienced but highly promising Axel Tuanzebe.

United make a quick return to Brighton next week in the Carabao Cup with the exact date for the fourth round tie yet to be confirmed.

UEL: Pepe redeems himself as Arsenal ease to win at Molde