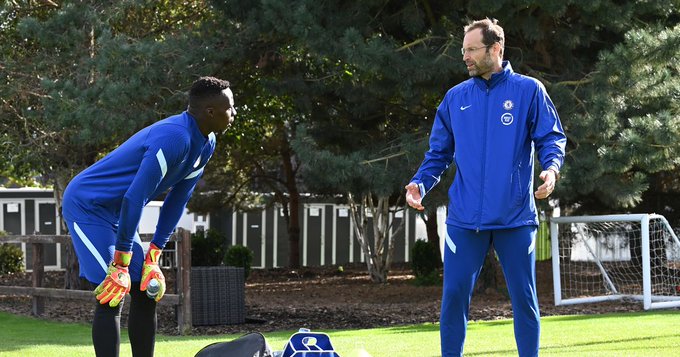 Frank Lampard has revealed Petr Cech will work with Chelsea’s new signing Edouard Mendy and the error-prone Kepa Arrizabalaga as the Blues boss bids to solve his team’s goalkeeping problems.

Former Chelsea ‘keeper Cech has been employed by the west London club as technical and performance advisor since his retirement in 2019.

Edouard Mendy getting down to business at Cobham. It looks like the new boy enjoyed a chat with the legend that is Petr Cech as he was put through his paces. #CFC #WelconeMendy pic.twitter.com/BugQLEq7rJ

But the 38-year-old, who finished his playing career at Arsenal, was recently pictured at Chelsea’s Cobham base training alongside Kepa and Lampard’s goalkeeping coach Henrique Hilario.

Lampard confirmed Cech was taking part in some of the training, not as a replacement for Hilario but to add his wealth of experience to the sessions after a troubled spell for Kepa.

Kepa, the world’s most expensive goalkeeper, was dropped twice by Lampard after costly blunders last season and is likely to lose his place again when Mendy becomes available after Saturday’s trip to West Bromwich Albion.

“Having Petr train with the ‘keepers and bring his experience is a great thing,” Lampard said. “He still has great quality, I think he retired pretty young. He is training and keeping fit, that’s healthy for him and good for the ‘keepers.”

“Petr has his day job but he is also working with the goalkeepers,” he added. “Why would you not tap into the best goalkeeper in the world, which he was for a long time, to pass on that knowledge.”

Kepa’s time at Chelsea since his £72 million ($91 million) move from Athletic Bilbao in 2018 has been troubled and it would be little surprise if Mendy’s arrival prompted him to look for a move.

Asked if he was open to Kepa leaving on loan, Lampard said: “No clarity on that one yet. I’m not going to speak about what might happen in the future.

“I’ll have conversations with all the goalkeepers. I’ll be very open about it and see the way to move forward. We know we have had problems in the goalkeeping area in the first two games of this season and at times last year.”

After spending around £220 million revamping his squad since the end of last season, Lampard is under pressure to deliver silverware in his second season in charge.

The Chelsea boss believes the character of his players is as important as their talent.

He said he had read James Kerr’s book “Legacy”, which looks at the All Blacks’ team culture.

“As much as a great talent can help on the pitch, there can also be a character that doesn’t want to push,” he said. “That can be a negative. That is something you work against.

“There are many things I see in training day to day, interactions, how they act around the training ground, are they positive influences with their team-mates?

“Those things come into my thinking to build a positive group that wants to win.”