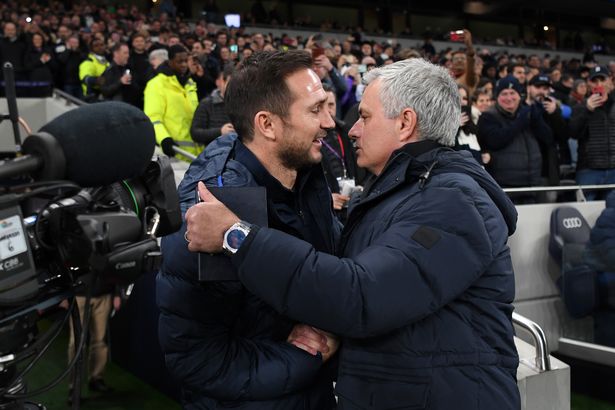 Frank Lampard appears to have little sympathy for Jose Mourinho after the Tottenham manager slammed his side’s fixture schedule ahead of the Carabao Cup tie against Chelsea.

Spurs have a hectic week ahead in which they play the Blues on Tuesday, Maccabi Haifa in the Europa League on Thursday and Manchester United in the Premier League on Sunday.

Speaking following his team’s 1-1 draw with Newcastle United at the weekend, Mourinho suggested he would have no choice but to field a weakened side against Chelsea, saying: “I would like to fight for the Carabao Cup but I don’t think I can.

“We have a game on Thursday that gives us not as much money as the Champions League, but the group phase of the Europa League gives us a certain amount that for a club like us is very important.

“It’s a competition with a possible group phase that gives us a good chance to go through to the next knockout stage, so this game on Thursday is very important for us.”

Responding to his former boss’s comments, however, Lampard stated his belief that Spurs do not have things any more difficult than many other teams so far this season.

When asked about it, he said: “Yeah, I mean, I know that, and I know it’s a busy time for Tottenham because of the Europa League.

“It’s a busy time for us all. They had a free mid-week last week, we didn’t.

read also:Mourinho to Alli: Fight your way back into the team

“I know they have a busy week this week. But when I analyse Tottenham and know the squad they have, and analyse what might be a team that maybe didn’t play 90 minutes pretty much.

The post Lampard hits back at Mourinho over Carabao Cup comments appeared first on Sporting Life.