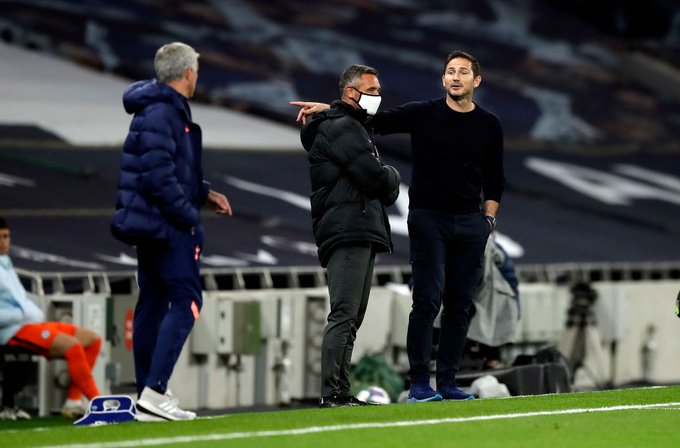 Frank Lampard and Jose Mourinho made light of their touchline spat as Tottenham prevailed against Chelsea in the Carabao Cup.

Old friends Jose Mourinho and Frank Lampard exchanged words on the touchline during the first half at the Tottenham Hotspur Stadium.pic.twitter.com/dNJXJ5lLD0

During the London derby at Tottenham Hotspur Stadium, Chelsea boss Lampard and Spurs counterpart Mourinho were involved in a heated exchange in the first half.

Mourinho and Lampard enjoyed incredible success together as manager and player at Chelsea, where the pair won two Premier League titles together among other honours.

Lampard on Mourinho: “We were having some fun on the line. I commented on the fact that he seemed to speak more with the referee than he speaks with his players so it is just a moment with us.”

But there was no love lost between Lampard and Mourinho in the Carabao Cup tie, though both were quick to praise each other after the match when asked about the incident.

“We were having some fun on the line,” Lampard told reporters following Mason Mount’s missed penalty. “I get on well with Jose and I think he said that to me.

“I commented on the fact that he seemed to speak more with the referee than he speaks with his players so it is just a moment with us.

“I have a huge respect for Jose, no matter what he says on the touchline. I think he was feeling the sense of the first half and how it was. All was well at the end of the game and that will never change.”

Mourinho added: “With Frank the most important thing is my feelings towards him rather than any words we exchanged. I owe him everything he gave me, he always gave me everything he had as a player and I never forget that.

“My feelings towards him will always be feelings of how much I owe him for how much of an incredible player, friend he was.

Mourinho vs Lampard is getting feisty

“In the last match when they were losing 3-0 [against West Brom] I felt really sorry for him because he was sad and quiet in his chair. In terms of football I can’t teach him anything, he knows football, it is just an opinion, stay on the touchline when your team is losing and stay calm when your team is winning.”