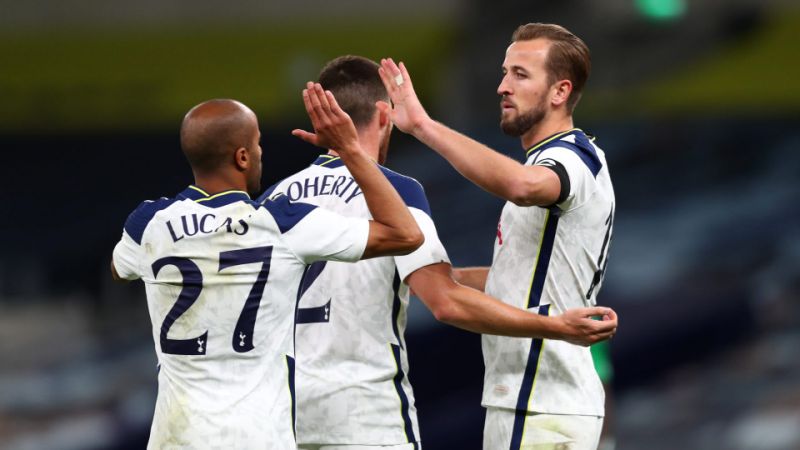 Tottenham got a hat-trick from Harry Kane, Giovani Lo Celso (two), Dele Alli and Lucas Moura to beat Israel side Maccabi Haifi 7-2 and qualify for the group stage of the Europa League on Thursday.

Happy taking this home to add to the collection

Kane’s opening goal after only 90 seconds, redirecting Ben Davies’ cross into the six-yard box, was very much a sign of things to come.

Jose: “We were just clinical. We hurt them many, many times in transition. Job done.” #THFC

It wasn’t all Tottenham doing the scoring, though, as Jose Mourinho’s side conceded an equalizer in the 17th minute.

Giovani Lo Celso bagged his brace shortly after, as he smashed a left-footed curler from near the penalty spot in the 36th minute and lifted the ball over American goalkeeper Josh Cohen in the 39th.

Spurs were them victims of the handball rule once again in the 52nd minute, as Matt Doherty was whistled for the offense despite having his arm straight down by his side and no more than an inch or two away from his body. Maccabi Haifa pulled back to 4-2 with the ensuing penalty kick.

The shoe was switch to the other foot four minutes later, though the handball penalty awarded to Spurs was significantly less egregious. Kane stepped up to the spot and hammered it home to restore the three-goal advantage.

There’s nothing more satisfying than a Dele Alli nutmeg, Dele is at his best when he’s playing with a smile on his face

Spurs’ no. 10 wasn’t finished, though, as he still needed another goal to complete his hat trick and secure his 12th match ball in a Spurs shirt. That said, it’s Bergwijn who deserves the majority of credit for his sensational dribbling down the left wing and the perfectly weighted, perfectly timed through ball he tapped to Kane.

The cherry on top of the scrumptious sundae came when Alli won, and converted, Spurs’ second penalty of the game in the 91st minute. He did so with typical flair and a nutmeg, of course.