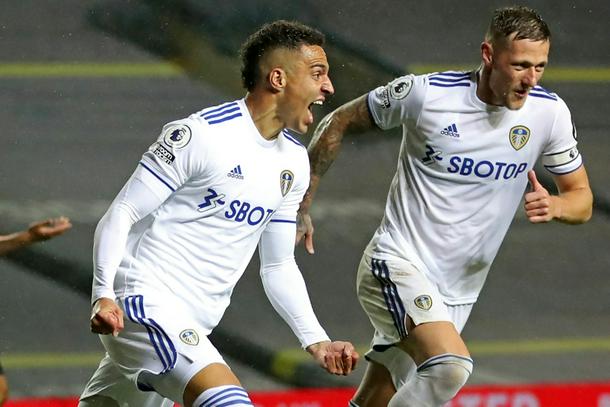 Manchester City were made to a bad mistake from Ederson as Rodrigo capitalised to score his first goal for Leeds United and secure a 1-1 Premier League draw at on Saturday night.

City, hammered 5-2 at home by Leicester City last weekend, made a blistering start in driving rain at Elland Road and Raheem Sterling deservedly put them in front.

Leeds grew into a pulsating contest, though, and record signing Rodrigo opened his account for the promoted side soon after coming on when goalkeeper Ederson made a mess of trying to deal with a corner.

Rodrigo also hit the crossbar twice as the Whites continued their impressive start to life in the top tier, although City felt they should have had a late penalty for a challenge on Sterling.

It meant Pep Guardiola and Marcelo Bielsa having to settle for a point apiece in a clash that was billed as the master against the apprentice.

City started with vigour and Kevin De Bruyne almost caught Illan Meslier out with a whipped free-kick from the left that rattled the post when the Leeds goalkeeper was expecting a cross.

New signing Ruben Dias should have marked his City debut with a goal, but nodded a Riyad Mahrez corner wide from close range and Ezgjan Alioski headed over unmarked at the other end.

And the lively Sterling cut in from the left and found the far corner with a clinical finish 17 minutes in, Torres getting the assist.

City ought to have had breathing space, but they were indebted to Ederson for spreading himself twice to deny Stuart Dallas and Luke Ayling before the break as Leeds warmed to the task on a miserable evening.

It was an error from Ederson that gifted Leeds an equaliser just before the hour-mark, though, the Brazil keeper flapping at a corner and Rodrigo taking advantage of a deflection off Benjamin Mendy’s back to tuck in just a few minutes after coming on.

That corner came after Rodrigo had struck the crossbar with a deflected effort and the substitute was came close again when Ederson tipped his header against the bar with Leeds scenting victory.

Patrick Bamford could have put Leeds front in the closing stages, while City wanted a spot-kick when they felt Liam Cooper brought down Sterling, but neither side could fashion a winner.