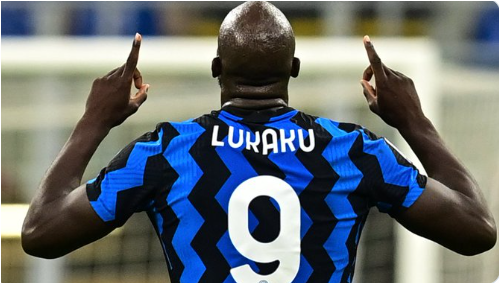 Romelu Lukaku takes revenge on his Manchester United critics, explains Antonio Conte ‘took me to another level’ and why Inter are one big happy football family. ‘You see what I could’ve been doing in England.’

The Belgium international gave a lengthy interview to The Times newspaper in England, assuring he has found his niche at San Siro and in Serie A.

“Here, they call me the hardest worker in the room.

“They will call me slow and I’m like, ‘Me, slow? I cannot keep up with the fast pace game of Man Utd?'”

“A year ago, when I was in England, I was ‘lazy, I didn’t run, I didn’t do this and that’. Here, they call me the hardest worker in the room,” said Lukaku.

“If you look at me playing here and there, I mean, there are improvements, yeah, but the [same] Rom is still here.

“Stuff happens in football but it’s something you need to explain to the next generation of kids, that you need to have full control over your destiny. Make sure when you go somewhere that every piece of the puzzle has to be right. Know what I mean? At the time, we saw the outcome, we saw how I did. And if you look at me now you see a different outcome, you see the full person, you see the full potential. You see what I could have been doing in England.”

He saw a “negative spiral” of criticism in the Premier League and is relishing his ability to prove them wrong now he is at Inter.

“They will call me slow and I’m like, ‘Slow? Me, slow? I cannot keep up with the fast pace game of Man U? There were too many little things where I thought this is not right.”

He already has three goals in two Serie A games this season, but in his debut campaign at Inter found the net 34 times in 51 competitive matches, reaching the Europa League Final.

I want to thank God for putting me in this position. My mom and my brother for the unconditional love and support! Antonio conte and his staff thank you for the daily work and for believing in me. And especially my teammates you guys made this happening for me. Thank you!! pic.twitter.com/XIM8V4d52j

His decision to walk away from Manchester United last summer had a lot to do with finally getting to work with Conte, after a close call in Turin in 2017.

“He took me to another level of where I was at,” Lukaku said of Conte.

The failure to join Juventus was also partly down to Conte, as the striker could tell “something was up when he was talking to me,” and indeed the coach resigned three days later.

Belgium played Conte’s Italy at Euro 2016 and Lukaku was fascinated by the tactics of a side with Simone Zaza and Graziano Pellè upfront.

There was another potential get-together at Chelsea and that time the deal was seemingly done, only to crumble at the last minute.

Lukaku is enjoying his time in Serie A and not just because of Conte, but the different sense of camaraderie, helped by his ability to speak eight languages.

“When (Ashley Young) came in and with Victor (Moses) and Christian (Eriksen) we were always together because we know each other from the Premier League and I was translating for them for a little bit, but once Ash got the basics of Italian it was over.

It’s not to say Conte treats Lukaku or anyone else with kid gloves and he has already spoken about being embarrassed for a tactical error.

Romelu Lukaku has more goals for club and country in 2020 than anyone in the Premier League, La Liga or Ligue 1.

What a signing from Antonio Conte

Read Also: How Chelsea will lineup vs Crystal Palace after latest injuries

“He calls you out in front of everybody on the videos if you’re not in the right positions,” Lukaku said. “It’s nothing to me. I’m here to improve and help the team win. I’m not here to be sensitive and if a coach cusses me out I’m going to respond to it differently.”

The 27-year-old also revealed to The Times that he is planning an autobiography and a documentary on his rags to riches tale.