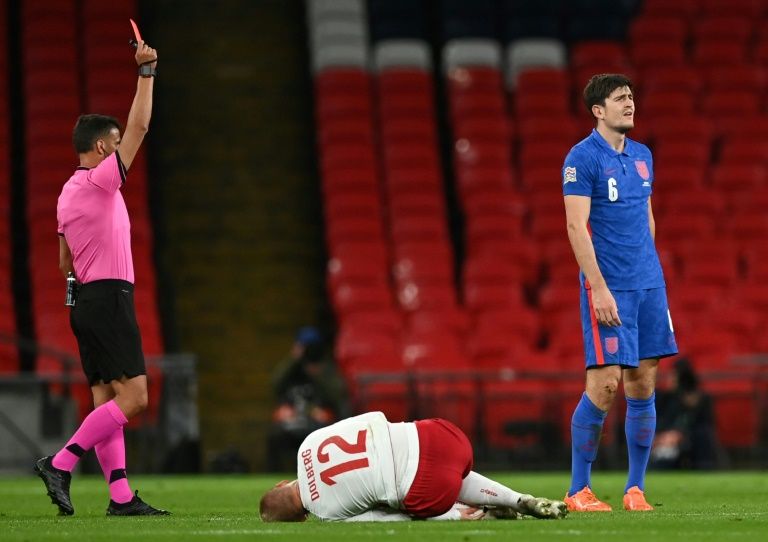 Harry Maguire’s wretched season hit a new low as the England defender was sent off before Christian Eriksen’s contentious penalty gave Denmark a 1-0 win in the Nations League on Wednesday night.

Eriksen’s goal came just minutes after Maguire’s dismissal for two needless first half bookings and condemned Gareth Southgate’s side to their first defeat in 12 months.

Maguire was the third England player to be sent off at Wembley after Paul Scholes in 1999 and Steven Gerrard in 2012.

And adding to Southgate’s mounting discipline problems, Reece James was shown a red card after confronting the referee following the final whistle.

It was the latest blow in a troubled start to the campaign for Maguire, who has been in woeful form for Manchester United since his involvement in a brawl on the Greek island of Mykonos in August.

The #ThreeLions are so close to an equaliser, but @masonmount_10‘s header is kept out brilliantly by Kasper Schmeichel. pic.twitter.com/t5gQAy3STV

Maguire was given a suspended sentence of 21 months and 10 days in prison after being found guilty of repeated bodily harm, attempted bribery, violence against public employees and insult.

The conviction was nullified after he appealed, but the 27-year-old had only returned to the England squad for the current internationals after being dropped for their previous games following the incident.

Maguire might not be the only one who loses his place in Southgate’s team after this lacklustre performance.

England came from behind to hand top ranked Belgium their first defeat since 2018 on Sunday, building on last week’s friendly win against Wales.

The #ThreeLions are beaten at @wembleystadium. The ten men worked hard to get themselves back into the game, but couldn’t find an equaliser. pic.twitter.com/L7ZZBg3wda

But Southgate had urged his team to show they can maintain the consistency required of elite teams and this was an underwhelming response.

England are now third in Nations League Group A2, behind both Belgium and Denmark.