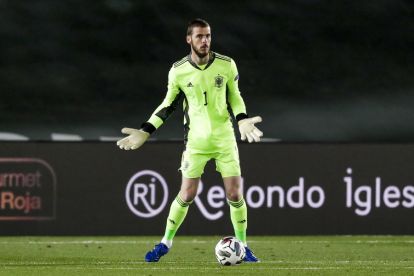 Spain boss Luis Enrique has offered his support to goalkeeper David De Gea after the Manchester United was at fault for Ukraine’s 1-0 win over Spain in Kiev.

Despite another high profile error from De Gea for the Spanish national side, Enrique refused to criticise his No.1 claiming the whole squad were responsible for results that went against them.

“Blaming De Gea is an obsession and has become a turn on,” Enrique told a post match interview with El Chiringuito.

“The responsibility for each goal belongs to the whole team.

“We need to improve and create more scoring chances.

“I am happy with what I have seen today within the squad that opinion has not changed.”

Enrique has endured a mixed run of results following his return to the Spain job with two wins and two draws from his first five games back at the helm.

Jose Gaya’s late goal secured a 1-1 Nations League draw against Germany in his first game back in charge with wins at home against Switzerland and Ukraine alongside this loss to Ukraine and a friendly draw with Portugal.

La Roja will complete 2020 with three games in November including away games against Holland and Switzerland and Germany’s visit to Madrid.