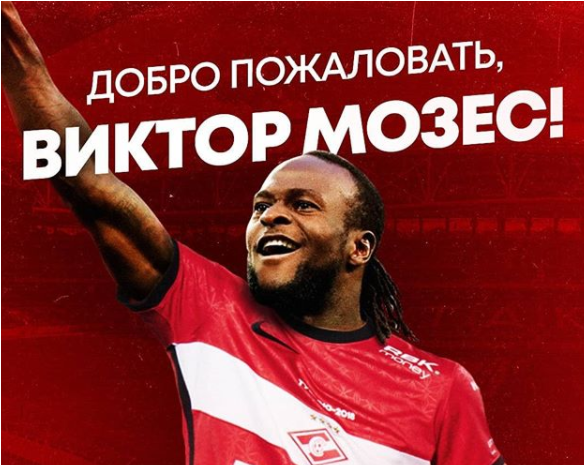 Victor Moses has disclosed that he is excited to sign for Spartak Moscow and already looking forward to meeting his new teammates.

The former Nigeria international completed his season-long loan deal from Chelsea to Spartak Moscow on Thursday and set to resume training next week.

Speaking via his media team, Victor said he’s excited about the new challenge and also described Spartak Moscow as one of the biggest clubs in Europe.

“It’s a pleasure for me to sign for Spartak Moscow, one of the greatest clubs in Europe, I can’t wait to get started and meet my teammates. It’s going to be an interesting season,” he said.

Spartak Moscow has the option to sign the 29-year-old winger permanent deal at the end of his loan spell next year.

Moses was part of the Nigerian team that competed at the 2018 FIFA World Cup in Russia, but he retired from international football immediately after the tournament.