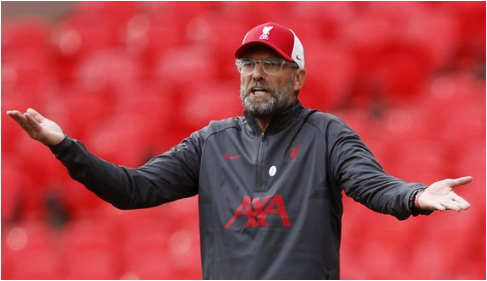 Jurgen Klopp angrily told his players to “wake up” after lowly Fulham threatened to inflict a damaging defeat in the Premier League title race.

The champions salvaged a point with a hard-fought 1-1 draw through a late penalty by Mohamed Salah as Fulham claimed they should have had a spot-kick of their own in the first half.

Manager Scott Parker was furious with Andre Marriner after the referee was asked to check the pitchside monitor by the video assistant referee, Lee Mason, but decided Fabinho had not fouled Ivan Cavaleiro.

read also:Liverpool boss Klopp insists contract, not on his mind

Ahead of Wednesday’s meeting between the two at Anfield, Liverpool blew the chance to go two points clear of Tottenham Hotspur after a lackluster first half.

“First 30 minutes was not good and we needed to wake up but it was better after that,” Klopp said.

He added, about being animated: “I cannot write a book, throw it on the pitch and tell them to read it. So what I wanted was to just shake themselves and start again.

“A good start of the game is nice, but if you don’t start well then you can start again, start again and start again. We needed half an hour to get our feet in the game.”

Klopp revealed that Diogo Jota would be out for up to two months with a knee injury and that Kostas Tsimikas would be absent for a similar time. To add to their woes, Liverpool lost Joel Matip to a back problem at half-time.

Both managers felt aggrieved by refereeing decisions with Klopp arguing that Fulham’s goal should have been disallowed for “a clear foul” on Salah in the build-up. Parker dismissed this as part of the “shouting match” surrounding the use of Var.

Klopp: Liverpool not thinking about Premier League title at the moment

Boastful Burnley boss: We might lack talent – but not belief!

Klopp: Liverpool not thinking about Premier League title at the moment

Boastful Burnley boss: We might lack talent – but not belief!